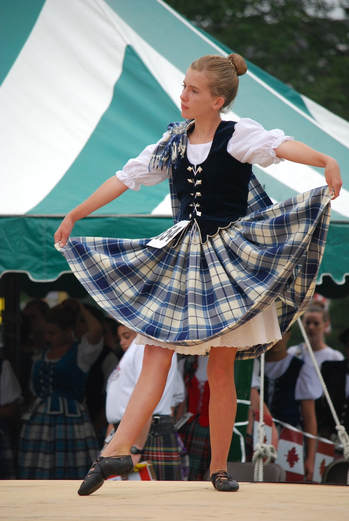 Highland Dance Competition
Perhaps nothing captures the spirit of Scottish culture better than the sight of Highland dancing being performed at a Highland gathering, such as our Spokane Scottish Highland Games. Dating back to the 11th or 12th century, Highland dancing tells a story or reflects upon a way of life. Requiring both athletic and artistic skill, dances tended to be performed by men to commemorate martial victory, conflict, joy, etc. as well as being used as an exercise by warriors. Scottish dances such as the Highland Fling and the Gillie Chaluim (Sword Dance) are in fact so vigorous that one must be in top physical shape to perform them. According to tradition, the old kings and clan chiefs used the Highland Games as a means to select their best men at arms, and the discipline required to perform the Highland dances allowed men to demonstrate their strength, stamina and agility. Long hours of practice are required for a dancer to become proficient enough to dance the intricate figures as lightly and gracefully as they should be danced. Competitive Highland dancing began during the Highland revival of Victorian Britain and was for men only. Women did not begin competing until the turn of the 20th century. Whilst the majority of dancers now entered into these competitions are female, the roots of these ritualistic dances lay with warriors imitating epic deeds from Scottish folklore. Those dances done today are a culmination of influences over the several centuries, the most stylistic influences coming from France.

Before 1950, there were no rules or standards for competition – each competition was run independently of the rest. In January of 1950, in Stirling, Scotland, a board was created to refine and standardize all dances so that all dancers would be judged the same. This board is the Scottish Official Board of Highland Dancing (SOBHD). To become certified by the SOBHD, a judge must pass a difficult examination concerning dancing rules and regulations.

Each dancer is judged on three basic areas: timing, technique and general deportment. Whilst the dancers are on the stage, the judge’s attention is directed principally at the feet of the competitors. Regardless of the skill of the dancers in other aspects, bad positioning of the feet mars the performance. Judges also observe the hand movements and posture.

The five groups of dancers: Primary (under seven years of age), Beginner (until the dancer has won six contests), Novice (until winning six more competitions), Intermediate (for one year from the last novice competition) and Premier (open class for the very experienced). As there are age classifications in each group, dancers are competing with other dancers no more than three to four years apart in age.
The following descriptions provide some of the history of the dances and offer notes on the dress and the fine points to watch for.

​The Highland Fling
This dance from the 17th century, the oldest of the traditional dances, is perhaps the best known and is a victory dance following battle. It depicts a stag frolicking on a mountainside, with the curved arms and hands overhead representing the stag’s antlers, and is the only dance where the tempo of the music does not change and there are no traveling steps. Traditionally, the warriors performed this dance on the small round shield (targe) that they carried into battle. As most targes had a steel spike projecting some five or six inches from its center, one can understand the quick footwork and dexterity the dancers must possess. Because of its precise movements, it is often used in dance-offs to determine the best dancer. 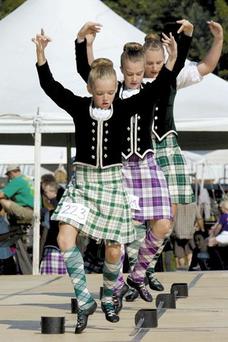 The Sword Dance
The Sword Dance (Gillie Chaluim -- Gaelic for “the servant of Calum”)
The history of this dance may go back to 77 A.D. during the reign of Agricola, a Roman governor of Britain. His son-in-law, Tacticus, a historian, chronicled many interesting accounts including the Caledonian practice of dancing on upright swords. The specific dance itself is believed to date to King Malcolm III of Canmore. After killing one of Macbeth’s chieftains in mortal combat at the Battle of Dunsinane in 1054, he was said to have taken his opponents sword, crossed it with his own still bloody claymore on the ground symbolizing the sign of the cross and danced over them in exaltation. For centuries, the dance was used to reliever tension before battle. Men had to exhibit great self-control because, if the swords were touched whilst dancing, defeat in the battle was predicted.
The Strathspey and Highland Reel (A.K.A. The Reel of Tulloch)
Cold parishioners waiting for their tardy preacher on a cold Sunday morning in the Ivernesshire village of Tulloch in northeast Scotland are credited with creating this dance. To keep warm the people began to stamp their feet and clap their hands and, when someone started to whistle a highland tune, the whole group developed into a lively dance. In colonial America, the Highland Reel evolved into the Virginia Reel. The reels are the closest competitive dance to social dancing. Although a group dance, the dancers are judged individually.
Seann Triubhas
Pronounced “shawn trewus” in the Gaelic, it is translated into the English as “old trousers.” The dance is romantically associated with Scottish disgust during the period from 1746 to 1782 when, following the Battle of Culloden Moor where Bonnie Prince Charlie was defeated by the English armies, the Scots were forbidden to wear the ancient Highland Dress, and had to wear the despised Sassenach trousers instead. The first part of the dance, which is slow flowing movements, mocks the uncomfortable trousers and shows the Highlander trying to shake and kick off the offending garments. The second part, a reel, shows the dancer once again feeling free in his traditional garments. The quick, haughty hand movements suggest the hatred of the repression and the unshackling from both the oppressor’s clothing and bondage.
The following National Dances may also be performed at the Spokane Scottish Highland Games:
​
The Sailor’s Hornpipe
Originally a Celtic dance, the Hornpipe is on of the traditional solo dances of the British Isles. The name comes from the hornpipe, an English folk wind instrument made from an ox horn, which accompanied the dance. In time, the dance grew to be so popular among seamen that it became know as the “sailor’s hornpipe.” The costume is based on a British seaman’s uniform. The dance imitates many shipboard activities typical in the days of wooden ships. You will recognize rope hauling, climbing the shroud lines, and others sailing activities. 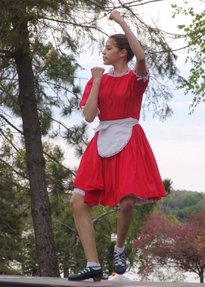 Village Maid Dance
The Scottish Lilt, Flora MacDonald, Village Maid & Blue Bonnets
These four dances are known as the Scottish National Dances. The attire worn by the dancers is different from the Fling, Swords, etc. It is know as the Aboyne Dress, originating from the Aboyne Highland Games in Scotland. The National Dances are very similar to Highland dances, but the style is more flowing and ballet like. They, like the Highland dances, require great skill and execution and the rhythms are often more complicated than those used in Highland dancing.